Irish was the main everyday language in the Ashe household and Thomas spoke the language fluently from a very early age. He developed a deep love for the language and everything Gaelic. During his term as monitor in Ardamore School, he became the local organiser of the Gaelic League. He was involved in the local feiseanna both in organisation and from time to time as a competitor.

Later on while in De La Salle College an Irish class was organised for students. Ashe was the teacher. His great love of the language, coupled with his exceptional ability as a teacher, made the task of the students in his class an easy and pleasant one.

His active association with the Gaelic League continued during his brief term as teacher in Minard. It was at this time he began visiting the “seanchaithe” and local folklorists in the area collecting old sayings, legends, poems and songs. In later years, while home on holidays, he visited his sources of folklore always adding to his vast store of history and local knowledge.

Shortly after being appointed principal of Corduff N.S. in 1908, he began organising Gaelic League classes in the area – Irish language, music and dancing. He was also involved in organising feiseanna and also produced plays in Irish.

Through his dedicated involvement in the Gaelic League he became a member of the Coiste Gnótha. Among Ashe’s colleagues on the Coiste Gnótha were Seán Mac Diarmada, Seán T. O’Kelly, Eamonn Ceannt, The O’Rahilly, Dr. Douglas Hyde, Eoin Mac Néill and many others who a few years later were colleagues again in different circumstances. Ashe had very definite views on the part the Irish language and culture should play in the educational system and also how it could be the means to unite the people of the country in the campaign for freedom. These views brought him into conflict with the conservative element of the Coiste Gnótha. However, the executive body of the Gaelic League recognised his ability as an organiser and it selected Ashe and Diarmuid Lynch to go to the United States to raise funds for the Gaelic League. Ashe spent eight months, from February to September 1914, on this mission.

During his spell in America he met among others two men who shared his beliefs in social justice and Irish independence. They were the old Fenian John Devoy and Roger Casement who was in America raising funds for the Volunteers.

Ashe and Lynch were relatively successful in their mission. The outbreak of World War I put an end to their fund-raising campaign. 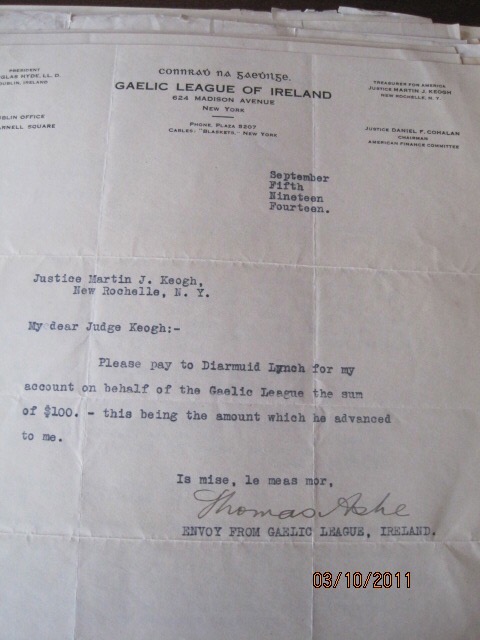