Thomas Ashe’s body was removed to the Pro-Cathedral in Marlborough Street for solemn Requiem Mass on Thursday and from there to the City Hall to lie in state until the day of his funeral, Sunday, September 30Th. An armed guard of uniformed Irish Volunteers kept vigil as thousands of his countrymen came to pay their respects and offer a prayer for the repose of his soul.

Tens of thousands of people travelled from all parts of the country to be present at his funeral. Ashe’s funeral was a moral protest of intense depth by people of all classes and beliefs from the four corners of Ireland and this was clearly shown by the firing party marching on either side of the hearse with rifles reversed, an act in defiance of the government laws. The hero was buried in Glasnevin Cemetry beside many who shared his ideals and hopes.

A tall, handsome, pale-faced man stepped forward.  He was in the uniform of a Volunteer officer.  Few at this time knew him, and had to learn his name from the next day’s papers: “Vice-Commandant M. Collins.”  He spoke a funeral oration characteristic of the new Ireland that had been born:

“The volley we have just heard is the only speech it is proper to make above the grave of a dead Fenian.”’

After his death, thousands of copies of the last poem written by him in Lewes Jail were circulated. ‘Let me Carry your Cross for Ireland, Lord’ contained a prophecy that did not come true:

“And few are the tears that fall for me…, When I go on my way to You.”

The British Government became alarmed at the rising tide of public anger over Ashe’s death and on the evening before his funeral the Republican prisoners in Mountjoy were granted full political rights. A massive transfer of support and sympathy took place immediately afterwards and this was indicated clearly by the radically changing mood of the press, the clergy and many public bodies.

An inquiry into his death began on Thursday, September 27Th. This lasted for eleven days, and owing to adjournments did not conclude until November 1St. Tim Healy was the lawyer representing the Ashe family. His skill and ability in law helped to uncover and expose the dreadful conditions which led to Ashe’s death.

The verdict of the jury was that he died of heart failure and congestion of the lungs which was caused by him being left on the cold damp cell floor for fifty hours after his bed, bedding and boots were taken away and then being subjected to forced feeding in his weak condition after a hunger strike of five or six days. Finally the jury censured the authorities which let this happen and after condemning forcible feeding recommended that it be discontinued.

Afterwards, the London Daily Express commented that “Ashe’s death and funeral had made 100,000 Sinn Féiners out of 100,000 constitutional nationalists.” An exaggeration maybe, but undoubtedly the brave death of Thomas Ashe was a major factor in winning tens of thousands of people over to the campaign for an independent Irish Republic.

‘The body of Thomas Ashe lay in state in Dublin’s City Hall for two days and tens of thousands passed before it, many weeping, many angry, all sharing a new pride…The day came, and through Dublin passed a cortege the like of which had not been seen since the death of Parnell.  Leading the marching host were Volunteers in full uniform, carrying rifles.  There was a hush over the city at the daring of it.  Everyone wondered would the challenge be accepted; would the troops suddenly bar the way of the Volunteers? 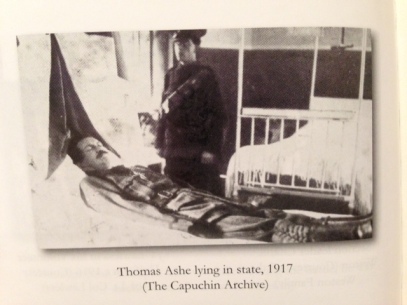 Thomas Ashe funeral along the North Quays of Dublin 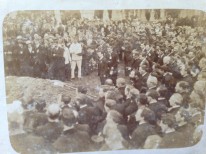 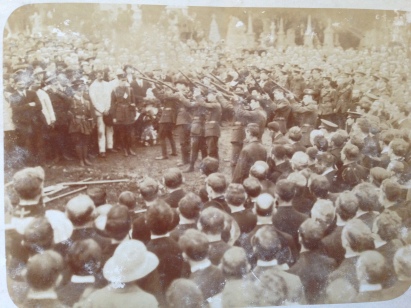 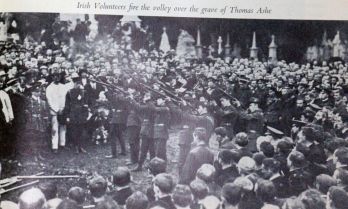 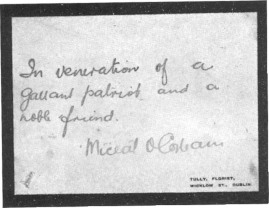 This memorial card was sent by Irish leader Michael Collins to Ashe’s family shortly after his death.Collins gave the short but powerful oration at Ashe’s graveside. “Nothing additional remains to be said.That volley which we have just heard is the only speech which is proper to make above the grave of a dead Fenian”